Over millions of years, rivers and streams flowing through the region carved the rock layers into hills and created wide and flat river valleys. Sediment carried in and deposited by the streams in the river valleys is younger than the rock making up the surrounding hills.

During the Cretaceous Period, much of Kansas was under water much of the time. Unlike the relatively shallow seas that covered Kansas in the earlier Carboniferous and Permian periods, the advancing and retreating Cretaceous sea was deeper and more widespread. Three principal rock outcrops characterize the Smoky Hills—the sandstones of the Dakota Formation, the limestones of the Greenhorn Limestone, and the thick chalks of the Niobrara Chalk. Each type of rock formed from sediment that was deposited at different depths or under different environmental conditions.

The eastern sandstone range, called the Smoky Hills likely due to the early morning haze that often gathers in the valleys, lends its name to the whole region. Hills there consist mainly of the Dakota Formation and underlying sandstone of the Kiowa Formation.

The Dakota Formation sandstones crop out in a wide belt from Rice and McPherson counties in the south to Washington County in the north. They are the remains of beach sands and sediments dumped by rivers draining into the early Cretaceous seas. The hills and buttes in this part of the Smoky Hills, such as Coronado Heights in Saline County, are capped by this sandstone and rise sharply above the surrounding plains. 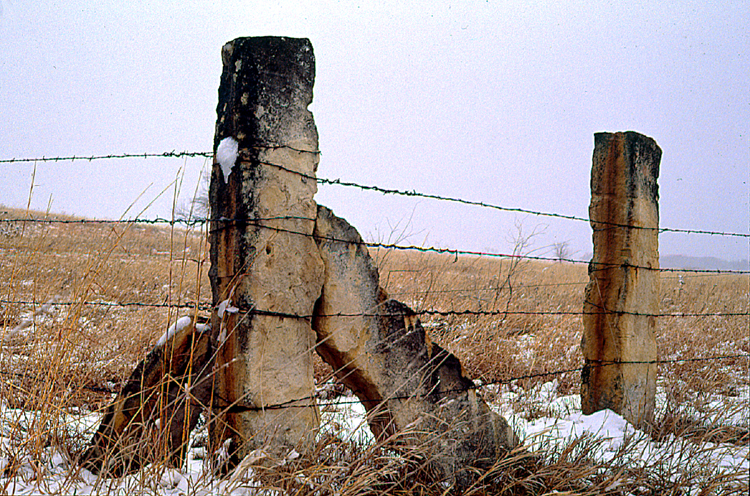 Good examples of Dakota and Kiowa sandstones in the Smoky Hills portion of the region can be found at Coronado Heights, Kanopolis State Park in Ellsworth County, and Wilson State Park in Russell and Lincoln counties. Spherical and oddly shaped Dakota sandstone concretions can be seen at Mushroom Rock State Park and Rock City.

The middle range of hills, to the west of the Smoky Hills range, is topped by the Greenhorn Limestone formed from sediment deposits in a relatively shallow part of the Cretaceous sea. The limestone beds, which are often less than six inches thick, alternate with beds of grayish shale. Near the top of the Greenhorn is a bed called Fencepost limestone. Because timber was scarce in this part of the state, early settlers used limestone extensively for buildings and fence posts. This part of the region is often referred to as Post Rock Country.

Limestone fence posts and buildings constructed out of fencepost limestone are scattered throughout Post Rock Country. One good place to see limestone construction is the Cathedral of the Plains (St. Fidelis Church) in Victoria east of Hays, where Inoceramus shell fossils are visible in the walls.

The westernmost range of hills developed in thick beds of Niobrara Chalk. These chalk beds, which formed from massive deposits of shells and skeletons from tiny sea creatures in the deeper part of the Cretaceous sea, have been exposed by erosion in bluffs of the Solomon, Saline, and Smoky Hill rivers and in an irregular belt from Smith and Jewell counties to Finney and Logan counties. Spectacular fossils of large swimming reptiles—plesiosaurs and mosasaurs—and other marine life as well as gliding pterosaurs have been chipped out of the chalk beds.

The Niobrara is known for the pinnacles, spires, and odd-shaped masses formed by chalk remnants, such as Castle Rock and Monument Rocks in Gove County. The Nature Conservancy's Smoky Valley Ranch in Logan County includes chalk bluffs and badlands along the Smoky Hill River and will be opening a newly acquired badlands area called Little Jerusalem to the public, likely in the summer of 2017.