Blending in with the surrounding High Plains landscape, the optimistically named Mount Sunflower in Wallace County is hard to spot on the horizon. Yet at 4,039 feet above sea level, it holds the distinction of being the highest point in Kansas. That puts it more than 3,300 feet above the state's topographic low point in southeastern Kansas.

Although far from the mountains in Colorado, Mount Sunflower still owes its height to the Rocky Mountains. The High Plains on which it lies were built up from massive amounts of sand, gravel, and other rock debris worn off the Rockies and carried east by flowing streams millions of years ago. As streams deposited the sediment, it formed into a giant wedge called the Ogallala Formation, which is the foundation for the High Plains.

Mount Sunflower is southwest of Goodland and northwest of Sharon Springs. Although it is on private property, the landowners allow access to visitors aspiring to conquer its lofty summit and gaze over the vast shortgrass prairie landscape. 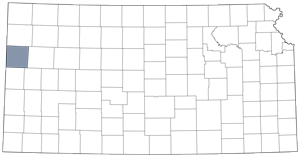