World famous for well-preserved fossils of giant swimming and soaring reptiles and other marine creatures, the Niobrara badlands of western Kansas have attracted eminent fossil hunters since the mid-1800s. Some of the most dramatic chalk formations in the badlands are accessible to the public at Little Jerusalem Badlands State Park in Logan County.

The cluster of pinnacles, hoodoos, and canyonland known as Little Jerusalem is owned by The Nature Conservancy (TNC), which partners with the Kansas Department of Wildlife, Parks & Tourism to make portions of the 332-acre area open to the public. The park includes scenic overlooks and two hiking trails.

The oldest rocks in the bluffs and badlands are predominantly from the Smoky Hill Chalk Member of the Niobrara Formation. The chalk formed from sediment deposited in a sea that covered much of Kansas about 80 million years ago during the Cretaceous Period. Over millions of years, the buried chalk layer was exposed at the surface and sculpted into swirling shapes and rocky ravines by erosion.

Younger rocks in the overlying Cretaceous-age Pierre Shale formation crop out in the northern part of the Smoky Valley Ranch preserve. Even younger sediments were deposited in the later Pleistocene and Holocene epochs. Those sediments include sand, gravel, and a wind-blown silt (called loess) that cover surrounding uplands and sand dunes in the Smoky Hill River valley. 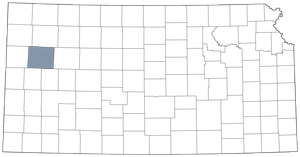