The only urban state park in Kansas, Kaw River State Park encompasses 76 acres of oak and hickory forest along the south side of the Kansas River — informally known as the Kaw — in west Topeka. Several trails for hikers, runners, and mountain bikers of various skill levels wind through the steeply sloped forests. They include double-wide gravel surfaced walkways and single-track dirt paths.

The park's boat ramp is one of 27 access points for canoes, kayaks, and other small craft along the 170-mile-long Kaw, which starts at the confluence of the Republican and Smoky Hill rivers in Junction City and flows into the Missouri River in Kansas City, Kansas.

The Kansas River was greatly shaped by glacial ice that dipped into the northeast corner of the state during the Pleistocene Epoch about 600,000 years ago. Sheets of ice reached the current route of the river from Topeka to Kansas City before slowly receding. As the ice advanced and then gushed meltwater as it retreated, old stream channels were buried and new ones forged.

A source of drinking and industrial water, sand and gravel, and recreation, the Kansas River passes through or borders 10 Kansas counties. According to the state's latest population estimate in 2018, those counties are home to nearly 45 percent of all Kansans. 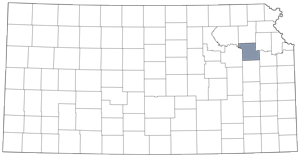