In contrast to the straight borders that separate most of Kansas from its neighbors, the boundary in its northeast corner mostly follows the rambling path of the Missouri River.

Riverfront Park east of downtown Atchison provides a closeup view of the river, upstream from the nearby Amelia Earhart Memorial Bridge that carries traffic between Kansas and Missouri. The park's Lewis & Clark Pavilion overlooks the river and is named for the expedition that passed this point in 1804 in search of a water route to the Pacific Ocean. The pavilion provides interpretive information about the expedition, the river, and the Kanza Nation once prominent in the area. A short path north leads to nearby Independence Park, which has an overlook on the river's edge, boat ramp, and boat dock.

Before being engineered to control floods, stabilize banks, and ensure more predictable navigation, the river frequently changed course by meandering across its floodplain. Although engineered now with levees, upstream reservoirs, and bank stabilization projects, the river still rises, falls, floods, and sometimes shifts small bits of Kansas to the east side and vice versa. One of the most visible examples of this phenomenon is found to the north in adjacent Doniphan County. When flooding in 1952 cut off a meander loop containing Rosencrans Memorial Airport near St. Joseph, Missouri, the river's new route separated the airport from the rest of Missouri. Although the river shifted, the state line didn't, so for a short stretch they now take different paths. 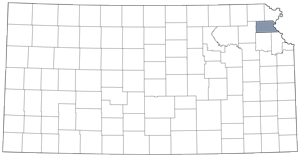