Kaw Point Park marks the spot where the Kansas River — informally called the Kaw — flows into the Missouri River. Upstream from the rivers' confluence, the meandering Missouri doubles as the boundary between the states of Kansas and Missouri. Downstream, the river and state line part ways where the river makes a sharp turn into Missouri and the state line heads straight south.

The 10-acre park in Wyandotte County offers a sweeping view of the rivers and the surrounding urban landscape, including the Kansas City, Missouri, skyline and the visible line where the darker water of the Kaw meets the lighter-brown Missouri. Trails, picnic areas, a boat ramp and docking area, and an outdoor amphitheater are among the amenities. An open-air education pavilion highlights the Lewis and Clark Expedition, which camped nearby in June 1804.

At the mouth of the Kaw, William Clark noted, "this River recves its name from a nation which dwells at this time on its banks. ... This nation is now out in the plains hunting Buffalow. ... the high lands Coms to the river Kanses...a butifull place for a fort, good landing place, the waters of the Kansas is verry disigreeably tasted to me."

Since the expedition's stopover, the confluence is thought to have shifted a quarter mile upstream on the Missouri due to flooding, erosion, and other forces. By the early 2000s, the area around the confluence was strewn with overgrown brush, rusted steel drums, old equipment, and abandoned cars in the midst of industrial development. As the bicentennial of the Lewis and Clark Expedition drew near, the site was revamped and opened to the public. It is managed by the nonprofit Friends of Kaw Point Park, Inc.

Starting in the early 20th century, the once wider and muddier Missouri was engineered to control flooding, enhance navigation, and provide hydropower and water for cities and industries. The Kansas River, which starts at the confluence of the Republican and Smoky Hill rivers in Junction City, is a source of drinking and industrial water, sand and gravel, and recreation. 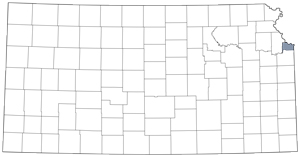