Big Basin is a large circular depression about one mile across and 100 feet deep that is bisected by U.S. Highway 283/160. Based on the age of the rocks in its walls, geologists estimate the basin formed fairly recently (in geologic time, that is), probably within the last few thousand years. The floor of the basin, about 125 to 150 feet below the rim, is relatively flat.

Rocks in the wall of the basin are Permian and Cretaceous in age. The Big Basin Formation, the uppermost Permian unit in Kansas, is named after the basin because that is where it was first recognized. That formation comprises silty mudrocks (shale is one type of mudrock) and fine-grained red silty sandstones with some anhydrite and dolomite.

Little Basin, to the east of Big Basin, is about 280 yards (just under three football fields) in diameter and 35 feet from rim to floor. St. Jacob's Well, a 50-foot-wide spring-fed pool in the bottom of Little Basin, is a sinkhole within a sinkhole. No one has ever reported seeing it dry.

The entrance to the preserve is east off of U.S. Highway 160-283, about 15 miles northwest of Ashland and 15 miles south of Minneola. The vehicle trail is minimally maintained and should be driven with caution. The trail, running along the southern and eastern edge of Big Basin to Little Basin, includes two scenic overlooks toward Big Basin and parking at Little Basin. A foot path leads down through Little Basin to St. Jacob's Well, which once served as a watering site for cowboys driving cattle up from Texas. 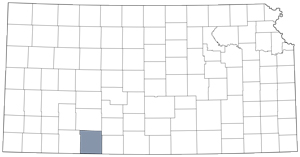