Geology and water resources greatly influenced where the Kitkahahkis built their earth-lodge villages during the late-18th and early-19th centuries in what are now the states of Kansas and Nebraska. Also known as the Republican Pawnee, the Kitkahahkis alternated between established communities along the Republican River and nomadic summers hunting on the plains. In the spring, they planted crops before traveling great distances in pursuit of bison. When fall neared, they returned to their villages to harvest.

Remnants of a village occupied in the late 1700s by the Kitkahahkis — one of four Pawnee bands — are visible at the Pawnee Indian Museum State Historic Site in northwest Republic County. The limestone museum building encircles the excavated remains of a large earth lodge, and evidence of 26 other lodges are found on the six-acre site. In all, the village probably had up to 76 of the dome-shaped structures.

Advantageously locating on a bluff, the Kitkahahkis established the village high enough above the river to avoid flooding but close enough to access water and timber, both scarce on the surrounding open prairie. The bluff, which offers a good view of the Republican River valley to the north and east, also served as a lookout for attacking adversaries.

Soil at the site, formed from a thick layer of silt called loess, was favorable for raising corn, beans, squash, and watermelon. Loess, which is composed of microscopic particles, is often derived from rocks and gravel ground down by flowing glaciers and can be carried great distances by the wind before being deposited far from its place of origin. Mass quantities of loess were transported broadly by the wind during the Pleistocene Epoch, which lasted from 2.6 million to 11,700 years ago and included several glacial periods. The Pleistocene-age loess in northern Republic County is up to 40 feet thick.

Thousands of artifacts found at the historic site during numerous archaeological surveys include native ceramics, beads, lithic tools, animal bones, shells, and charcoal and plant remains. A gun barrel, square nail, and knife fragments are evidence that the band likely traded with Europeans and Americans. 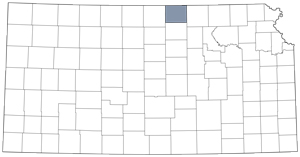