Native sandstone buildings with ornamental flourishes, a placid river, and traces of the Santa Fe Trail at the Fort Larned National Historic Site in Pawnee County provide insight into human history on the plains as well as the area's geology and natural resources.

Established on the Pawnee River in 1860, Fort Larned served double duty as protection along the trail and an annuity distribution point for Plains Indians. Although mostly vacated by 1878, several of the fort's sturdy structures endured — first as storage facilities and housing for farming and ranching operations and now as historic treasures.

Fortuitously, Fort Larned is well preserved because trees were scarce. After the initial riverbank dugouts and adobe structures there rapidly deteriorated, civilian builders were brought in to create housing and work areas out of durable Dakota Sandstone quarried nearby. Accented with pine timbers brought from Michigan, the buildings are excellent examples of American military-post architecture in the Victorian era.

The nine surviving buildings, constructed between 1866 and 1868, include barracks, storehouses, officers' quarters, and a shop for bakers, saddlers, carpenters, wheelwrights, and blacksmiths. Just four years after that building binge, the railroad arrived and the fort headed for obsolescence.

The Pawnee River on the western edge of the fort was the sole source of drinking water. When the fort was established, the river was lined with willow, cottonwood, black walnut, ash, and other native trees. Within a short time, its banks were stripped clean by the fort's inhabitants, as were the banks of the Arkansas River eight miles downstream. It took decades of regrowth for the trees to fully recover.

A remnant of the Santa Fe Trail on a separate tract of land about four miles southwest of the fort is also part of the Fort Larned National Historic Site. The 44-acre section of prairie has never been plowed, although cattle were grazed there until efforts to restore the native vegetation habitat were initiated in 1975. An extensive prairie dog colony is located on the trail site.

Fort Larned lies at the intersection of three of the state's 11 physiographic regions — the Arkansas River Lowlands, the High Plains, and the Smoky Hills. Regional boundaries are drawn based on landforms — hills, plains, and river valleys — and the geologic forces that shaped them. The Pawnee River is a tributary of the Arkansas River. The rolling plain — now mainly farmland — was once covered with mixed prairie grasses typical of the eastern edge of the High Plains. The Dakota Sandstone, formed from sand along a Cretaceous sea shore about 100 million years ago, is characteristic of the Smoky Hills. 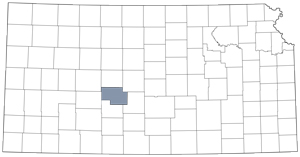