Cheyenne Bottoms northeast of Great Bend in Barton County is a major food and water stop for tens of thousands of birds each season on the Central Flyway, a migratory route stretching across the middle of North America from Canada to Mexico. As smaller wetlands in the flyway have been drained for farmland and other uses, the wetland environment of Cheyenne Bottoms has become increasingly vital for migratory birds and other wildlife.

Before the surrounding area was settled, Cheyenne Bottoms was an intermittent marshland in a 64-square-mile basin. In the 1950s, the state of Kansas began developing it into a more permanent and stable wetlands and wildlife area. Dikes now divide the marsh into a series of pools, and water is diverted between pools to maintain suitable habitat.

An elliptical natural land sink, the Cheyenne Bottoms basin is bordered on the north, south, and west by Cretaceous limestone and sandstone characteristic of the Smoky Hills region and on the east and southeast by Pleistocene sand dunes and alluvium of the Arkansas River Lowlands. Geologists have long debated the origin of the Cheyenne Bottoms basin. Suggestions over the past 120 years include stream erosion, dissolution of underground salt beds that caused overlying rocks to collapse, and structural movement within Earth.

Of the 20,000 acres in the basin managed by the Kansas Department of Wildlife, Parks and Tourism, about 12,000 acres are reliable wetlands. On the north end of the basin, the Nature Conservancy manages an additional 7,000 acres, which are also accessible to the public. Hunting (in designated areas) and bird watching are popular activities at Cheyenne Bottoms.

The Kansas Wetlands Education Center across Kansas Highway 156 southeast from the wetlands features exhibits on wetland wildlife and vegetation; the benefits of wetlands to wildlife, humans, and the environment; and wetland management. 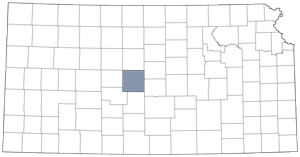