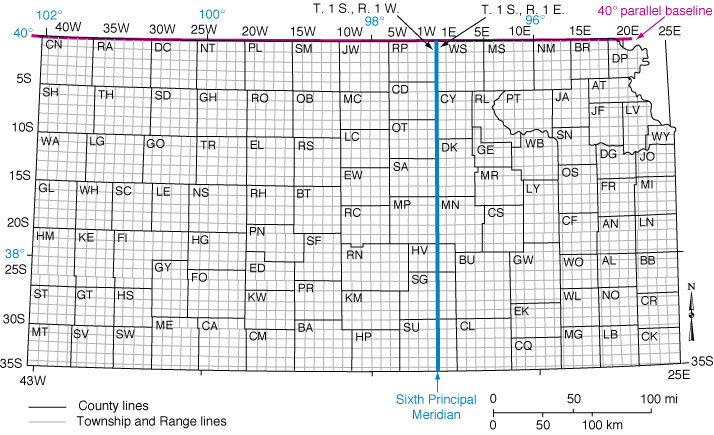 The U.S. Public Land Survey System (PLSS) was established shortly after the Revolutionary War as a way to describe and record parcels of land for legal purposes. In this system, land is divided into pieces called townships that are generally 6 miles on a side and contain 36 sections. Each section is about 1 mile square and contains 640 acres.

The PLSS grew out of a political movement led by Thomas Jefferson and John Adams that held that an essential part of a democracy was the right to own property. They argued that the land should not be given out in large grants to wealthy men and land speculation companies but should be divided into small parcels and sold for low prices. The PLSS ordinance, passed in 1785, set up a standardized national survey system that incorporated the better features of individual systems previously used by the colonies. The PLSS eventually included all of the United States westward from Ohio to the Pacific Ocean and northward to the Arctic.

A township is a basic unit of land within the PLSS. Normally, townships are 6-mile by 6-mile squares. Townships are designated by both a township and a range number.

In Kansas, township lines are numbered 1S to 35S, starting at the Nebraska border. "S" stands for south. (The Kansas-Nebraska border is the dividing line between south and north township lines.) Range lines are split between east and west at the Sixth Principal Meridian, which runs north to south through Wichita. East ranges are numbered from 1E to 25E to the Missouri border and west ranges from 1W to 43W to the Colorado border. On a map, township numbers run along the sides of the map and range numbers along the top or bottom. 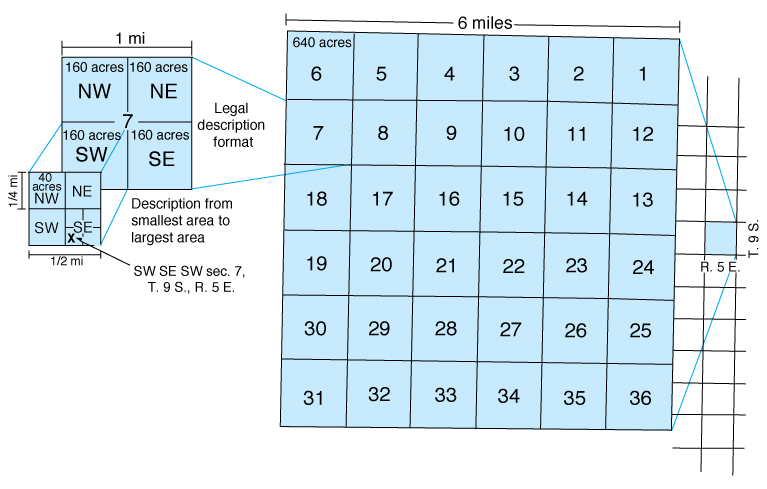 How to Use the PLSS

County ownership maps and U.S. Geological Survey topographic maps showing section, township, and range numbers can be used to identify the location of a farm, house, oil well, or other property based on its legal description.

In Kansas, not all townships and sections are perfectly square. Some townships have fewer than 36 sections, and some sections contain fewer than 640 acres, particularly along the east, south, and west borders of Kansas. One reason is that the surface of the earth is curved and range lines must be adjusted periodically to preserve the 6-mile by 6-mile configuration of townships. Another is that some land was not included in original surveys of the state, and later surveys conducted in a random fashion resulted in exceptions to the standard township-range-section system.