Mount Mitchell Heritage Prairie in Wabaunsee County is an intact tallgrass prairie that holds clues to the area's diverse geologic history. Walking trails at the park provide access to limestones and shales formed from deposits in intermittent seas during the Permian Period about 250 million years ago; quartzite boulders carried in and dumped by glacial ice about 600,000 years ago; and a panoramic view of the Flint Hills and the Kansas River valley, which was etched out thousands of years ago by flowing and meandering streams.

Blocks of limestone at the beginning of the trail are from the Grenola Limestone formation, and the top of Mount Mitchell is capped with the Cottonwood Limestone Member of the Beattie Limestone formation, which contains grain-like fusulinid fossils that are shells of single-celled marine organisms.

The 45-acre public park is operated by the Mount Mitchell Prairie Guards, a local non-profit grassroots group, and features displays about the area's cultural history. 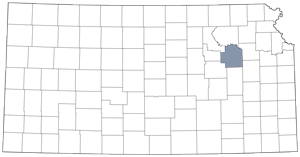