Oil and natural gas in Kansas 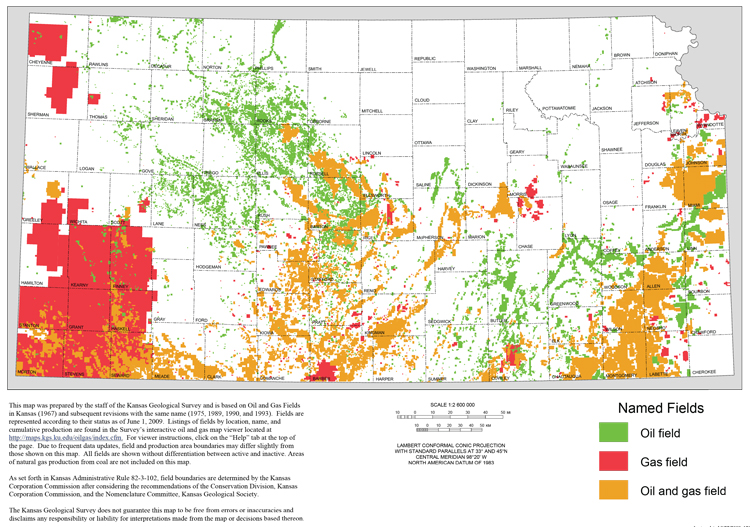 The petroleum industry is a major contributor to the economy of Kansas. Hundreds of thousands of oil and natural gas wells drilled in the state since the late 19th century have produced more than 6.7 billion barrels of oil and 41.2 trillion cubic feet of natural gas through 2018.

Oil and natural gas are both hydrocarbons because they are made up of molecules composed of hydrogen and carbon atoms. Hydrocarbons are usually liquid or gaseous but can be in solid form. Petroleum is a general term for hydrocarbons formed naturally within the earth.

Petroleum is mainly formed from tiny particles of microscopic plant and animal debris that accumulate on the bottom of a body of mucky water. A layer of debris is eventually buried under thick layers of sediment and rock and often ends up thousands of feet underground. Over millions of years, the material is transformed into various forms of petroleum through heat, pressure, and other processes. Petroleum is trapped underground in porous rocks, such as sandstone and limestone, or occasionally layers of sediment. When a well is drilled into the rock, the oil flows toward the well bore through the interconnecting pores or sediment and then flows or is pumped to the surface. The many products made with processed petroleum include gasoline and plastic.

Petroleum: A Primer for Kansas, published by the Kansas Geological Survey, describes the many complex processes involved in the formation of oil and natural gas, exploration and drilling methods used to find them, petroleum geology in Kansas, and the production of petroleum.

The Kansas Geological Survey is a repository for many types of data obtained in the process of petroleum exploration and production. The KGS collections include drill cuttings and cores from thousands of wells, various well logs of data obtained from boreholes, and voluminous other data accumulated through more than 100 years of drilling. KGS researchers evaluate and interpret data and publish information for the public. They also maintain online oil and gas databases and an interactive Kansas oil and gas well and field map, all available to the public.