The dam for Clinton Lake was constructed on the Wakarusa River in the late 1970s, and the spillway was carved out below the dam to hold excess water to prevent flooding if the lake's water level exceeded its capacity.

The spillway provides a rare vertical view of a sequence of rock layers that stacked one on top of the other in the Pennsylvanian subperiod about 300 million years ago. As an inland sea rose and fell over much of western North America, different types of sediments were deposited on the sea floor or along the margins of the sea, depending on the depth of the water. Those sediments were eventually buried and then compressed into limestone, shale, and other sedimentary rocks, depending on their sediment content. For example, when a clayey mud is compacted over time, it is compressed into shale, a type of mudstone.

The Oread Limestone is named after Mount Oread, the hill in Lawrence home to the University of Kansas. Geologist Erasmus Haworth was the first to describe the rock layer in 1894, which gave him naming rights. Haworth also was director of the Kansas Geological Survey in the early 1900s. 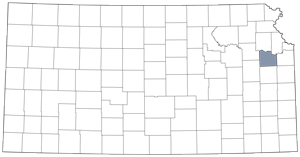