An unexpected strip of ravines and canyons, the Arikaree Breaks region in the northwestern tip of Kansas stands out in sharp contrast to the surrounding plain. The rugged canyonland, just two to three miles wide, cuts diagonally across northern Cheyenne County and stretches just across the state line west into Colorado and north into Nebraska.

Thousands of years ago when the now semiarid climate of the region was much wetter, flowing streams carved the series of gullies, ravines, and canyons out of a deposit of silt called loess that is up to 100 feet (30 meters) thick. In what seems like a contradiction, the flowing water easily eroded horizontal ravines in the loess yet the steep and vertical loess canyon walls remained standing despite thousands of years of assault by rain, wind, and other environmental assailants. That is because angular grains in the packed loess create enough cohesion to minimize weathering.

In some of the deeper canyons, streams have cut all the way down through the light-colored loess into the underlying Ogallala Formation and even deeper Cretaceous-age Pierre Shale. Today, the canyon streams, which drain toward the Arikaree River and the North Fork of the Republican River, are intermittent at best. Vegetation in the region includes yucca, sage, and prickly pear cactus.

A similar stream-carved terrain along the Cheyenne-Rawlins county line to the east is considered by some sources to be part of the Arikaree Breaks. Narrower, more subtle canyons to the south and east of the Arikaree Breaks drain to the South Fork of the Republican River, which diagonally dissects Cheyenne County.

The Arikaree Breaks are accessed on unpaved county roads that may not be passable in wet weather. 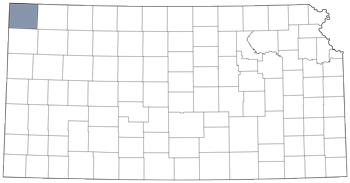