The trails provide a close-up look at Pennsylvanian-age limestone outcrops and younger alluvial fill—silt, sand, and other sediment—along Wolf Creek. The limestone formed from sediment deposited in shallow seas during the Pennsylvanian subperiod, which lasted from about 323 million to 299 million years ago. The Quaternary-age alluvial fill was eroded off outcrops and then carried in and deposited by flowing water in the river bed—a process that continues today.

Although limestone layers may contain marine fossils, most often shells, not many can be easily found in the rocks at the Overland Park Arboretum. The best place to look for them along the trails is on the freshly broken (lighter-colored) surfaces of pieces broken off the outcrops. Likely finds would include broken shell fragments or algae, which would appear as raised lines. Fossils are more common in slightly younger limestones found farther west in Johnson County. Those younger layers once covered the arboretum area but were eroded away long ago, exposing the Wyandotte Limestone.

There is a small entrance fee for the Overland Park Arboretum and Botanical Gardens, which is open year round. 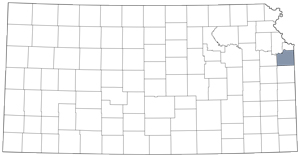