Roadcuts provide opportunities to see layered rock units that would otherwise be buried underground. One good place to see a sequence of Permian-age limestone and shale is the roadcut between mile markers 353 and 354 on U.S. Highway 56 east of Council Grove in Morris County. Starting at the bottom, the exposure includes the Funston Limestone, the Speiser Shale, and the Threemile Limestone Member of the Wreford Limestone. All were formed from sediment deposited in a sea that rose and fell during the Permian Period about 290 million years ago.

The Funston Limestone—named after a military camp at nearby Fort Riley—is a light-gray to bluish-gray limestone that occasionally contains layers of shale and chert. The Funston is a formation—a unit that can contain several layers of associated rocks. A formation that contains predominantly, but not all, limestone layers will be labeled "limestone."

The Threemile Limestone Member is a unit of the Wreford Limestone, which is a formation. The Threemile is one of the chert-bearing limestones that helped shape the Flint Hills. Because chert—also called flint—is harder than limestone, the presence of chert within a limestone layer keeps it from eroding as fast as the surrounding chert-less limestone. As water and other erosional forces work away at the rocks over millions of years, hills and valleys take shape as the chert-less limestone erodes while the chert-bearing limestone doesn't, or at least erodes much more slowly. The resistant chert can be seen capping the hills throughout the Flint Hills. 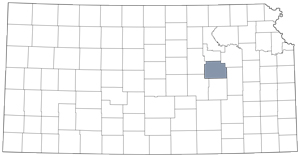