Eons and eonothems? Periods and systems? Understanding how geologists talk about time

These units are called geochronologic units, (geo = geology + chronologic = arranged in order from the earliest to the most recent).

The Geologic Time Scale shows the names of all of the eons, eras, and periods throughout geologic time, along with some of the epochs. (The time scale is simplified to include just the most commonly used unit names, so epochs before the Cenozoic Era and ages aren't listed.) The scale displays time chronologically from bottom to top—from the beginning of Earth's history to the present.

Layers or bodies of rock that formed during a given geologic time are classified in a chronostratigraphic unit corresponding to the geochronologic unit. (Chrono = chronological + stratigraphy = the branch of geology concerned with the order, age, distribution, composition, and fossil content of rocks.)

Examples of geochronologic units and their corresponding chronostratigraphic units:

Rocks categorized within a stage may be further divided into smaller units based on such attributes as physical and chemical properties, the natural environment in which they were formed, and the fossils they contain. Stages may be divided into groups, groups into formations, formations into members, and members into beds.

Examples of named units in a stage of the Carboniferous System in Kansas:

Groups, formations, and members may contain layers of more than one type of rock, such as limestone and sandstone, and are named for the most predominant type. The Little Osage Shale Member, for example, includes both shale and coal, although more shale than coal. Beds, however, consist of just one rock type. Thin layers of coal are a common type of bed in parts of eastern Kansas. 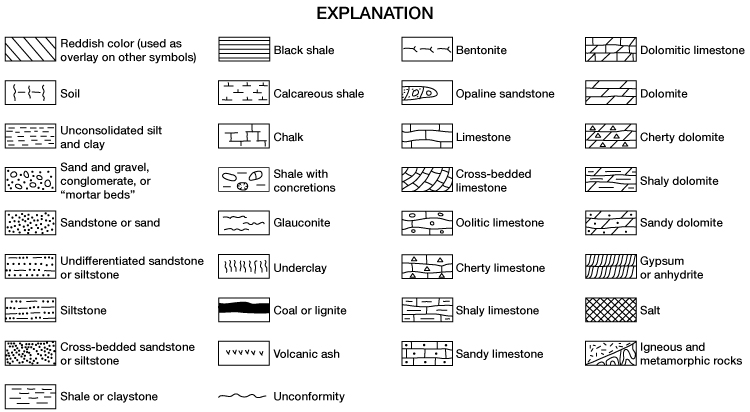 Most scientists worldwide agree upon most, but not all, rock unit names. Some names vary from state to state and country to country, especially for more localized rock layers. Rock units are often named for a town or other feature related to where they were first discovered. For instance, the Pfiefer Shale Member and the Jetmore Chalk Member were both named after Kansas towns. The Dakota Formation and Kiowa Formation were named for Native American tribes that lived on the Great Plains.

The Kansas Geological Survey’s stratigraphic guide and chart (with revisions adopted by the KGS Stratigraphic Nomenclature Committee) stand as the official record of formally accepted rock-stratigraphic unit names in Kansas.