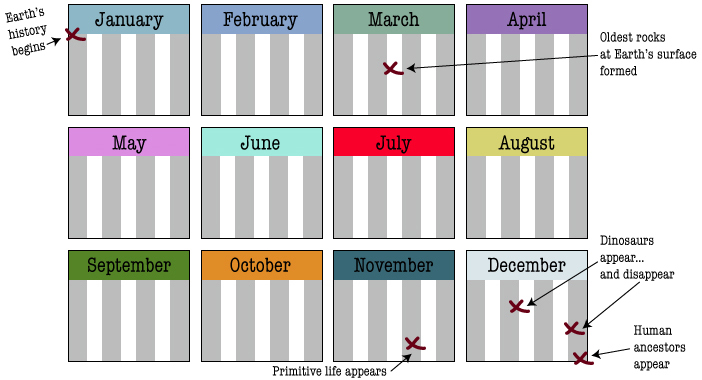 Earth is at least 4.6 billion years old. Such an expanse of time is hard to grasp, but it is fundamental to understanding basic geologic processes, such as the build up and erosion of rock layers that shape and reshape Earth's surface.

If you squeezed all of Earth's history into one calendar year, the first 4 billion years (informally known as the Precambrian), would last from the first of January into late November. The oldest rocks discovered at Earth’s surface would date from mid-March. Geologists know very little about what happened during the Precambrian compared to later periods. They do know that very primitive life forms first appeared in the late Precambrian seas—on the calendar that would be late November.

The vast majority of what we know about Earth's history would fall into December. Dinosaurs became dominant in mid-December but disappeared the day after Christmas. At about the same time, the Rocky Mountains were uplifted. The first human ancestors appeared sometime during the evening of December 31. Everyone on Earth today would have been born in the last millisecond of New Year's Eve.