Point of Rocks was a much-anticipated landmark for 19th-century wagon trains on the Santa Fe Trail's Dry Route because the prominent bluff signaled nearby natural springs at the end of a sometimes weeklong waterless stretch.

Rising above the Cimarron River valley in Morton County, Point of Rocks is capped by distinct white beds of Neogene Ogallala Formation calcrete. The Ogallala Formation is an expansive wedge of sand, gravel, silt, and clay that was eroded off the Rocky Mountains and then carried in and deposited by streams millions of years ago. At Point of Rocks, the sediment has been cemented into calcrete, which overlies older Permian-age beds of shale, siltstone, and sandstone.

For more than 100 years, geologists debated about the age of the red beds at Point of Rocks. Estimates ranged from the Permian Period to the Triassic, Jurassic, and Cretaceous periods. Recently, using cutting-edge technology that measures the uranium and lead content in tiny zircon particles in the rocks, KGS geologists determined the red beds belonged to the Permian Big Basin Formation, named after the mile-wide Big Basin sinkhole to the east in Clark County where the formation was first identified.

Point of Rocks is west off of Kansas Highway 27 about 10 miles north of Elkhart. It is in the Cimarron National Grassland managed by the U.S. Forest Service. The grassland encompasses more than 108,000 acres of land left in poor condition after the Dust Bowl of the 1930s and restored by the federal government. Wagon ruts are visible in places. 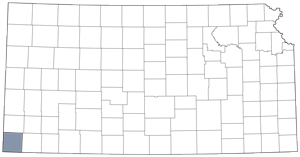